Now we'd made the smoker, we were keen to try the smoker straight away so bought a big piece of pork belly, half to cure so we can smoke bacon and half to smoke as it is, right now.
There's lots of advice online about rubs, marinades, brining and temperatures but we decided to keep it simple and just smoke it whilst keeping it as cool as possible. We'll try some of the variants in the future, but the downside of the internet is that there is just so much information it becomes overwhelming. I have to remind myself that people have just shoved the joint of meat up the chimney to smoke it for years. Okay, their ham may have been (to modern tastes) unpalatably smoky and salty but then I'm not trying to make my pork last the winter hanging in the kitchen.

I was keen to use some beech chips I'd been given ages ago and kept because I knew I'd get round to it some day. Maybe tripping over the bag every time I went into the garage was supposed to be a reminder?
I lit a fire in the bottom drawer, making sure to wait until any softwood I'd used to get it going had burnt away before I pushed the drawer in.
Whilst it was burning I cut a piece of field maple from the hedge and wedged it across the top of the top drawer. I stuck metal S hooks through the meat and hung it from the branch.

I then added a few handfuls of the chips to the fire, pushed it most of the way in, waited to see smoke come out of the top of the unit and hoped for the best.

What I hadn't anticipated was the amount of fussing the chips would need to keep going. We think that perhaps they weren't getting enough oxygen, so we did add a couple of holes along the side of the cabinet casing, on the side of the prevailing breeze, but in the meantime I  needed to relight the fire a couple of times.

In the end I decided purism was over rated and added some apple wood branches from our campfire pile which were much easier to keep burning, so it's a mixture of apple and beech. Honestly, I'm not sure I'm discerning enough to tell the difference...

How long to leave it was unclear, especially as the smoke had stopped and started. In the end we went for convenience and removed it in the early evening.

We kept it in the fridge overnight and I tried it the next day. We fried a bit and it was delicious but definitely needed seasoning, more so than if it had been straight pork.


We needed a one pot meal to take camping the following day, so I fried some and added it to fried onions and garlic that I simmered with dried split fava beans (I like these from Hodmedods, grown in the UK), a little bit of maple syrup and spiced blackberry vinegar and some left over sauce from meatball sandwiches that in turn was made from leftover homemade sweet and sour sauce, ketchup, plum dipping sauce and damson jampote (so I'm never going to be able to recreate that!).

I think it will be interesting to try smoking bacon next, and definitely to try smoking fish. With practice we'll keep the fire going more consistently and have a better idea of how long we like things smoked for.
Other conclusions are to try brining meat first to season it before smoking it and we'll buy a thermometer for the top drawer at least as I'm pretty sure we didn't keep it cool enough. Smoking in cooler weather is an obvious solution to that but we were to impatient to wait! 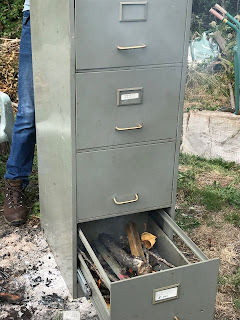 Making a smoker from a filing cabinet

I'm Hazel, married with 3 teenagers in Oxfordshire. We live with a changing number of rescue dogs and cats, chickens, ducks, quail and bees.
I'm aiming to become more self-reliant and live a more sustainable life.